Today is Brother Stair’s birthday – he’s 86.  In the past he’s told us they pay no mind to days like birthdays but he always points out his birthday and its significance every year.  This fine morning has Bro Stair talking to his audience from his front porch, instantly to all the world.  The miracle of technology and the Internet.  The same Internet that brought him pornography (which he aired in 2004) and increased the speed of his now witnessed spiral into increasing wickedness.

Brother Stair found out (by someone telling him) that he has been in the “ministry” for 70 years today.  That would mean he went into the ministry on his 16th birthday.  Unless Bro Stair is just using this ’70 years’ as another means to announce his birthday – this year.

This ‘going into the ministry’ was the result of going to church to chase girls and then running from God in a service where he was going to be found out.  As he was driving away from God that evening he decided that he was going to become the man that others fear and run from.  The man that others fear finding out what’s in them.  Thus we see the beginning of his “ministry”.  As it is today.

This ‘going into the ministry’ was the result of going to Church to chase girls and then running from God in a service where he was going to be found out that he was only there for the sexual advantage.  As he was driving/running away from God that evening he decided that he was going to become the man that others fear and run from.  The man that others fear finding out what’s in them.  Thus we see the beginning of his ‘ministry’ – as it is today.   Remember, Bro Stair tells us he was going to Church looking for girls when he was 16.  Now we’re informed that throughout his 16th year he was in the ministry.  Thus, chasing girls was his original ministry.  Thus saitheth the Prophet.

What we have here is a man that has not committed sexual sin outside of the ministry.  It’s been reported that Bro Stair recently (divorced and without a wife) said that he has more sex than all the rest of his congregation… combined.  What’s going on at that Farm that we or the authorities should know about?

Back on the porch, the old man is confused by his own echo.  Perhaps he thinks someone else is using his voice.  It does speak the same words Satan would but that’s your voice doing it Brother Stair.

Today we find Bro Stair is upset that others are preaching against Billy Graham.  Something Stair long did.  Apparently he doesn’t like their echos.

Bro Stair goes on to attack other preachers – calling them wicked men.  Has Bro Stair not looked in the mirror this morning?  Or listened to his Services.  Perhaps that’s why the Sabbath services are never replayed – his own wickedness would be apparent.  He certainly would never air them when his supporters in radio-land are listening.

To these echo preachers Brother Stair finally claims that he is the one man preaching the real Jesus.  While the apostle Paul says that Bro Stair is preaching Another Jesus.

The way of peace they know not.  Brother Stair quotes this like he’s never heard his own preaching toward his congregation.  If there is any ministry today that shows the world they are filled with rage and confusion, it is Brother Stair speaking to his Overcomer Ministry.  Fear is desired.  Fear is the absence of peace.  Bro Stair wants them to fear his words.  Probably because the fearful will be cast into the Lake of Fire [Rev 21:8].  Is that where Stair desires everyone to go – with him?

Living and speaking lies has been Brother Stair’s stock and trade [2Thes 2:11-12].  Now in standard hiding behind the false-front you put out to disguise your true self fashion Bro Stair is talking about liars as if he wasn’t the greatest of them.  Just like he did when he preached against adultery – until he was caught in it in 2001.  He was disguising his doing by bringing it to the forefront as if he was far removed from it.  Just like you can be sure he does in everything he talks about, point the finger at everyone but himself [Isaiah 58:9].

I’m reminded of what Paul said of those prophets that were slandering the Cretians saying that they were all liars.

The one thing that everyone that has lived with Bro Stair knows about him is this one truth – that he is a liar.  They may or may not still believe he is a prophet or a man of God, but they all know him to be a liar.  Thus their trust in him wanes.

Brother Stair, your people might love you, they might follow you (for now) but they all come to the place where they do not trust you.  That’s the change he sees in them.  Why they don’t respond to him as they once did – they don’t trust him.  Trust is something that has to be earned.  You cannot trust a liar.  Trust is something that can be betrayed.  You don’t trust a betrayer.  So trust is not automatic, and it is something that has to be earned and maintained.  Just like forgiveness.  It’s not a once trustable always trustable.  You see, betrayal can only come from someone you once trusted.  Someone that failed you, that let you down.  Or worse, turned on you.

Likewise, forgiveness has to be earned and maintained.  Forgiveness can be withdrawn when it is found to be taken with false repentance.  Just as Jesus taught when He was asked about forgiveness and said the ever quoted 70 times 70.  Do you realize that His next breath was in adding to that the Parable of the Unmerciful Servant?  Read it in Matthew 18:21-35.  Jesus tells us that forgiveness is extended to effect a change in the persons heart that they would then act in repentance and  mercy.  If that forgiveness is not reciprocated then it is taken from them and they will face a greater judgment for what they were forgiven of.

We’ve been told to take Mt 18:35 “This is how my heavenly Father will treat each of you unless you forgive your brother or sister from your heart.” to mean that we are to fearfully let everyone get by with everything or Gods hammer is going to come down on us.  We missed that this is referring to how God will treat those who do what this unmerciful servant did – forgiven his gross sins and then would not extend the least gnat to others.  Rather he demanded the more from them.  As if he was the Master whose servants knew he was going to require more from them.  Sadly, this is the picture of the actions we witness in Brother Stair.

The Purpose of This Waste

These 99% have one common Witness – what they have both seen and heard [Acts 22:15;  Jn 3:32].  This is the true witness.  Not the one they thought they had before they witnessed Brother Stairs’ fruit [Mt 7:15-16].  That false witness was something Bro Stair sold them that was based on the stories he told them, not on anything they factually knew about him.  Jesus told us that the witness we are to receive is the one that comes by the witnessed fruits of a man [Mt 7:20].  Because if God told you Brother Stair was a man of God, then God lied and was untrue to His Word.  God doesn’t do that.  So it wasn’t God who told you that.

In the end, this waste all comes down to the fleshly desires of that 16 year old going to Church for the girls.  Same as it ever was.  Only now we have an 86 year old who formed his own Church so that he could have has his pick of the girls.  Girls he has preached into submission so that he can exercise the will of his flesh over them.  His fleshly lusts have only magnified, as scripture said they would [2Tim 3:13].  When they eventually flee his wickedness he then preaches them into perdition.

As for today’s festivities – you know the prophet is going to want some cake from the sisters (yes, that’s a sexual reference just as Brother Stair intends it to be every time he ‘preaches’ that passage [1Kings 17:13]).  We suspect he will be wearing his birthday suit for the occasion too – as usual. 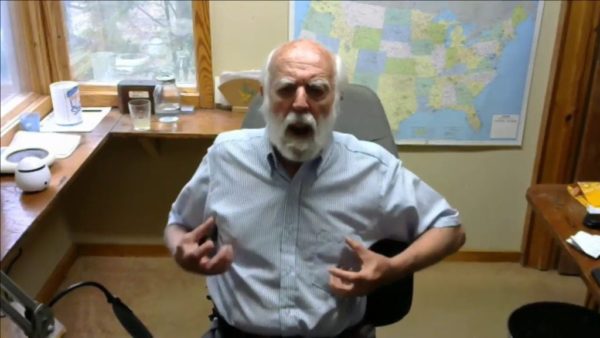 While Bro Stair teaches us to indulge the flesh, scripture tells us this leads to death (Rom 8:13).  We are to mortify the deeds of the body (Rom 8:13), to put to death (Col 3:5).  This I say then, Walk in the Spirit, and ye shall not fulfill the lust of the flesh (Gal 5:16).  The Lord knoweth how to reserve the unjust unto the day of judgment to be punished: chiefly them that walk after the flesh in the lust of uncleanness (2Pt 2:9-10).

Shall we continue in sin...?  God forbid.  How shall we, that are dead to sin, live any longer therein?  Know ye not,...?  ...even so we also should walk in newness of life.  Knowing this,... that the body of sin might be destroyed, that henceforth we should not serve sin. (Rom 6:1-6)

I have been crucified with Christ; and it is no longer I who live, but Christ lives in me; and the life which I now live in the flesh I live by faith in the Son of God, who loved me and gave Himself up for me. (Gal 2:20 NASB)

In putting off the body of the sins of the flesh by the circumcision of Christ. (Col 2:11)

Put to death, therefore, whatever belongs to your earthly nature: sexual immorality, impurity, lust, evil desires and greed, which is idolatry.  Because of these, the wrath of God is coming. (Col 3:5-6 NIV)

They [Bro Stair's teachings] are of no value in checking the indulgence of the flesh (the lower nature). [Instead, they do not honor God but serve only to indulge the flesh.] (Col 2:23 AMPC)

I say this because some godless teachers have wormed their way in among you, saying that after we become Christians we can do just as we like without fear of God’s punishment (Jude 1:4 TLB).

Brother StairCommunityNewsRadio
Sing unto the LORD; for he hath done excellent things: this is known in all the earth.
Isaiah 12:5
DailyVerses.net