It’s Passover today (evening of Wednesday the 8th) but the Prophet of Time who always gets his dates wrong.  [No wonder he doesn’t mock a date setter, he’d be mocking himself]  Brother Stair has set his 2020 Passover gathering for Friday evening the 10th – Good Friday.  This is even missing the date for the Feast of Unleavened Bread starting on Thursday sundown.  But the biggest abomination here is Brother Stair’s practice of Transubstantiation that will be practiced on Good Friday – just like a good Catholic with their Holy Eucharist.

Yes, that’s right, Brother Stair has turned the Passover into Communion time and rolled them all into Catholic Communion and their heretical Transubstantiation doctrine.  We coved Transubstantiation in the articles Passover the Kool-Aid and This is a Current and Important Announcement and how this is a Table of Demons (1Cor 10:20-22). 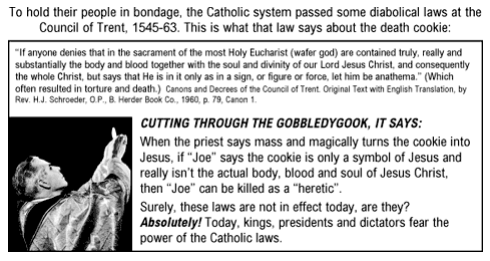 What we have here is celebrating Easter weekend and calling it the Passover.  Such a miss.  As this year Passover is on Wednesday, the same day as when Jesus was crucified.  Thus making the Sabbath start on Wednesday sundown.  Giving us 3 days and 3 nights in the earth.  Unlike the false church system teaches in their misunderstanding of thinking that the only Sabbath in the Bible is on Saturday.  So we see the Overcomer Ministry celebrating Passover like the lost pagan church system – recognizing only Friday sundown as the referred to Sabbath and then making Jesus a liar by not being buried three days and three nights.

What we should be asking is if those attending will be arrested or quarantined because the South Carolina Governor has issued a stay home order.  But the Prophet is asking people to (apparently) disregard the authorities and come spread the COVID-19 contagion.  At least we won’t (or shouldn’t) have any minors there this year for Brother Stair to give wine too.

How is the 6-foot distancing going to go over with the Prophet’s hugging obsession?  Or the seating arrangements?

What this Friday Passover again shows us is how Brother Stair does things by convenience rather than by what God says.

For some time the broadcast has been addressing the confusion of Brother Stair’s broadcast in announcing the wrong phone number.  Well, he also announces the wrong stations, the wrong times, the wrong dates, the wrong Jesus.  Plus Brother Stair lately puts on a call that is angry with him because he’s no prophet and isn’t doing anyone any good (he sure didn’t see this virus coming), he’s cursing and sounds like using words not allowed on broadcast radio but does he care?  Why Brother Stair is so used to hearing such words in his porn and he uses the ‘F’ word all the time himself on the Farm.

Brother Stair always gets his Feast Day dates wrong so this doesn’t surprise us.  This is all just another Sign and a witness to us.  I hope we all realize what it’s telling us.

Check out the article Passover 2020 for more information on this.

Some other relate past articles on Feast Days where you will see more commonality:

Grinders Needed, Come on Down

This is a Current and Important Announcement

The Face of Repentance