Probable cause for preposterous prophet Positive

Harve Jacobs of TV-5 in Charleston SC covered the hearing.

Charleston’s WCSC TV-5 did a short morning report before the hearing which was replaced throughout the day with more reports.

The day’s news followup reports from WCSC were as follows: 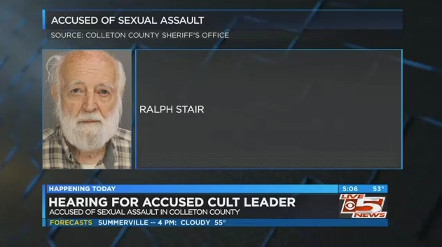 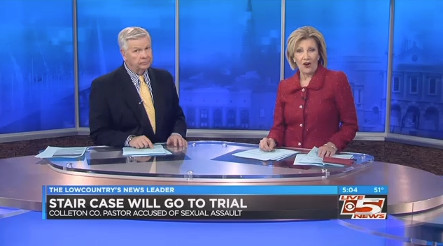 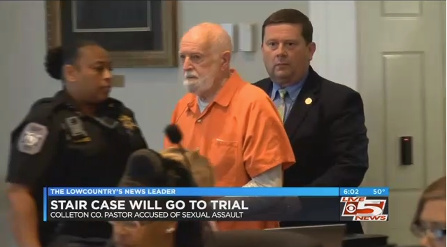 10:15 AM – Preacher accused of rape allowed access to his tabernacle – ARTICLE
Detailing that, “Under an amended bond order, 85-year old Rev. Ralph Stair will be allowed inside the tabernacle of Overcomer Ministries.”

Bro Stair will be going to Trail for Rape & Burglary

The day’s events were not what Bro Stair was expecting as he was hoping they would not find enough probable cause for a trial and so remove his GPS tracker and his restrictions for minors on his Farm and at his Tabernacle Services.

84-year-old Stair is accused of assaulting 6 members of his church.

The FBI may take the case over.  The FBI has interviewed former members.

Two or the Rape charges have been changed.

Warrants have been issued for two parents for not reporting Stair’s assault.

The case will now go to a Grand Jury before it goes to trial.

Preliminary Preceding was to No Profit (or to No Prophet)

Brother Stair missed the hearing which he talked about in Sabbath Service as having to be there and to not be late.  Perhaps the prophet of time (the man that is to reveal Gods time) didn’t know what time it was.  Guess he’s got to be false in that area too.

Ronald Reagan continued in office and left after his term was over on Jan 20, 1989.  With his health fully intact.  As can be witnessed in his interviews in 1989 and in his farewell speech on his last day in office. - 2 years after Prophet Stair said he would step down, be removed, or die.

Brother StairCommunityTabernacleCertain MenWarningSignsSexSinCultsGroping#TimesUpYouTubeArrestRapeTrialWCSC
For if there be first a willing mind, it is accepted according to that a man hath, and not according to that he hath not.
2 Corinthians 8:12
DailyVerses.net