Something unthinkable was happening at the Church in Corinth, something ‘that does not occur even among pagans’ (1 Corinthians 5:1). Paul gets reports that ‘there is sexual immorality among you’ (v1), and one of an advanced kind. ‘A man has his father’s wife’ (v1) and to top it all, ‘you are proud!’ (v2).

Mulyale Mutisya has another timely article that closely relates to the Overcomer Ministry and Brother Stair’s teaching this last Service.

Handed Over to Satan  Click the link to go read it on her site.

Brother Stair made sure to avoid the beginning of this verse last Sabbath Service so that he could condemn the River with it and use witchcraft and sorcery in getting his congregation to go along with putting his damnation on them.  This is a case of the wicked condemning the righteous for their standing for holiness and right behavior – something which Brother Stair will not tolerate (Pr 17:15).  Fortunately, the evil one touches them not (1John 5:18).

He that justifieth the wicked, and he that condemneth the just,
even they both are abomination to the LORD.
(Proverbs 17:15).

It could be said that the River turned Brother Stair over to Satan in 2017 (when he excommunicated them) by their leaving him to his own devices.  As Brother Stair would tell you if it was in his favor; don’t overlook the obvious, and put God in it.  So let’s do.  You will remember that within a few months after their ex-communication that Brother Stair was arrested and is still awaiting a trial for his last row of sex crimes.

Related:  By Their Fruits you Will Know Them

Doesn’t look like the River got the judgment on that one – but someone did.  Let them be desolate for a reward of their shame that say unto me, Aha, aha (Psalm 40:14).

You can hear more details about this hypocrisy of Brother Stair with the River Community in the recent series (and others) from The Final Witness. 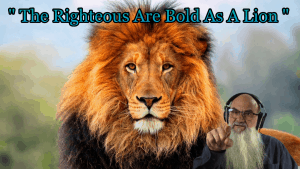 Find other related messages on TheFinalWitness.com

Brother Stair says he is Greater than Jesus

Clip from the Tabernacle May 20th 2006, Sabbath Service

Brother StairCertain MenWarningDeceptionServiceLast Day ProphetsSexFalse ProphetsPerversionGropingIniquityAdultery#TimesUpRiverOvercomer MinistryHypocrisySorcery#MeTooRebellionHolinessApostateNarcissismWickednessRage
Sing unto the LORD; for he hath done excellent things: this is known in all the earth.
Isaiah 12:5
DailyVerses.net