Brother Stair taught that the Great Falling Away began to take place in the summer of 2001 when over half his followers left him after his sexual sins were made known and they saw no repentance from them.

His followers left him because Brother Stair’s sins were revealed, or that the Man of Sin was revealed to be Brother Stair, and thus many Fell Away.  More would leave as more sins were known and the following year Brother Stair ended up in jail without bond awaiting trial for multiple charges of rape and mishandling of funds.  He was not acquitted of the sexual crimes but did manage to plea-bargain down to a lesser charge than what he was guilty of, to avoid trial and certain jail time. 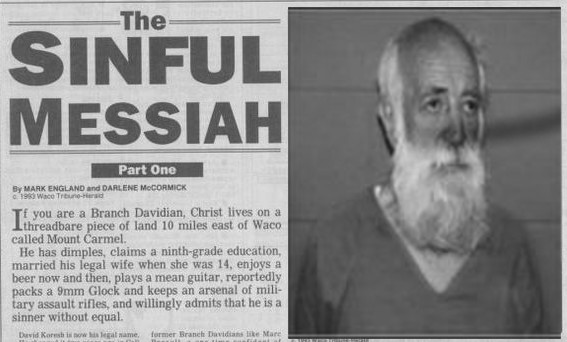 Is this the Man?

Brother Stair has identified himself as the Man of Sin.  Much like David Koresh proclaimed himself the Sinful Messiah.

In 2nd Thessalonians 2:3-4  scripture says that this Great Falling Away is what identifies the Man of Sin.  He is identified by those who fall away – from following him?  Because of his sin?  For it is his sin that is his Sign, thus his title.  According to scripture, the falling away is not to reveal those who fell away but to reveal the man of sin that they fell away from. (2Thes 2:3)

So we rejoice that this revelation of the man of sin as it brings us one step closer to the return of Jesus.

He is an opposer.
He exults himself, chiefly above Gods called people and what they worship.
He sets himself in God’s place unto God’s people, in telling them that he is God’s Man (of the Hour).
He sets himself up AS God.

Oblivious to the Obvious

Let us not overlook that this would fall in line with the scripture “waxing worse and worse” as this is referring to men who are not “getting” worse but that their deeds are becoming revealed to us as to their true nature.  Just as the Moon does not get larger, in waxing, its appearance is coming into light revealing its true nature.  Thus their waxing identifies them in 2Tim 3:13 as to who and what they are, and what they do (Mt 7:20).

2Thessalonians 2:1-3 (TLB)
And now, what about the coming again of our Lord Jesus Christ and our being gathered together to meet him?  Please don’t be upset and excited, dear brothers, by the rumor that this day of the Lord has already begun.  If you hear of people having visions and special messages from God about this, or letters that are supposed to have come from me, don’t believe them.  Don’t be carried away and deceived regardless of what they say.

2Timothy 3:13,17 (KJV)
evil men and seducers shall wax worse and worse, deceiving, and being deceived.
the man of God may be perfect, thoroughly furnished unto all good works.

14 thoughts on “The Man of Sin Revealed”

Brother StairCertain MenFalse TeachingSignsWarningDoctrineSinIniquityJesusMan of Sin
For the earnest expectation of the creature waiteth for the manifestation of the sons of God.
Romans 8:19
DailyVerses.net