What is wrong with America, the UK, Canada, the Democrats, the Republicans, the politicians, the Governments of the world, and the medical institutions is not that they are corrupt, wicked, and in error (though they are, that’s not the underlying reason for it) – it is that God’s people are not right.

Nations are only healed by the people of God within that nation who are walking in His ways [If My people].  God judges nations because of His people that fail to walk in His ways.  It’s easy to look outside and say that it is the wicked who are the reason for our problems.

In The House of God

Peter says that when the judgment of God comes, it comes first on, or at, the house of God: and if it first begin at us, what shall the end be of them that obey not the gospel of God? (1Pt 4:17).  Peter doesn’t stop there.  He goes on to warn us righteous that we are scarcely saved, so where shall the ungodly and the sinner appear? (1Pt 4:18)

God wants us saved and He’s going to save us from ourselves, and since we in these first-world countries have grown so comfortable and full that we have no need of nothing, not even God (Rev 3:17).  So He is going to begin the shaking, the cleaning, the threshing; in His house (1Pt 4:17-18).

The Rapture Will Protect Us

Too many of God’s people today want to say and think that “We’re not appointed to wrath” (1Thes 5:9), this is why so many believe in the Pre-Tribulation Rapture false doctrine.  This doctrine of demons will damn many Christians (1Tim 4:1).  We believe it will be the reason for the Great Falling Away (2Thes 2:1-3).

Many Christians are just not mentally prepared to have to go through any tribulation here on earth.  Many of those who manage to survive and don’t curse God and die (Job 2:9) will then take the Mark of the Beast because they don’t believe that they are going to be here when it rolls out.  Thus they will fall away (2Thes 2:1-3) and be eternally damned (Rev 19:20).

In Isaiah 9:8-21 through Isaiah 10:1-4 God warns His people – then as the nation Israel, now this warning is for His people in every nation – that God’s hand was turned against them in anger.  Why was this?  Because of their refusal to see God’s warning to repent, then in their pride, they chose to fortify themselves.  Their enemies clearly came against them (in America think 9/11) and they decided that they needed to be stronger rather than see it as a warning that God’s protection had been lifted from the nation – and repent.

They didn’t need God’s protection – they could do it themselves.  After all, they had taken God out of their schools and His words off their walls, and out of the halls of justice – and they were still standing.  Weren’t they?  They didn’t need God.  Now that wasn’t the doing of God’s people but God’s people let it go by and slowly more and more of God was taken away from the nation.

The nation was refusing God and His protection.  But it was because of God’s people who had become comfortable in the nation and were not willing to confront it (Rev 3:15-17;  Pr 1:32;  Isa 47:8-9;  1Thes 5:3) – and more – they did not “humble themselves, pray, seek, crave, and require of necessity My face and turn from their wicked ways” (2Chron 7:14).  It was because of this that God allowed the judgment upon the nation – because of the acts (or the lack thereof) of His people.

Let’s go back to 1 Thessalonians 5:9 and how “We’re not appointed to wrath”.  We might not be appointed to God’s wrath but that doesn’t mean that we’re not going to get it if and when we chose to walk outside of God’s will.  Just ask the third of the master’s servants who thought he was doing right by preserving the little that he was given.  He suffered the Master’s wrath (Mt 25:30).

Further, the Tribulation period is not God’s Wrath – it’s the wrath of Satan through the Dragon, the Beast, and the Man of Sin.  God’s Wrath comes after we are (actually) taken up when Jesus returns and pours out His wrath on those that have exercised wrath on God’s people (Rev 19:19-21;  2Thes 2:8).

Gather together and pray, you shameless nation, while there still is time—before judgment begins and your opportunity is blown away like chaff; before the fierce anger of the Lord falls and the terrible day of His wrath begins.  Beg Him to save you, all who are humble—all who have tried to obey.  Walk humbly and do what is right; perhaps even yet the Lord will protect you from His wrath in that day of doom. (Zeph 2:1-3 TLB)

Yet, what we now see coming will be God’s wrath upon an ungodly shameless nation.  Or upon a nation where His people have become ungodly and lost sight of God (Jer 10:24) and have no shame about it.  Because the if and when clause has been activated.  As students, we didn’t have an appointment with the Principal and his wrath but if and when we messed up and did wrong – we got a Pass that gave us an appointment to his wrath.

Then there’s the blind ignorance of many calling themselves Christians who think they’re going to be raptured out of having to deal with any serious problems saying, “We’re not appointed to God’s wrath”.  But this is not God’s wrath its Satan’s wrath.  God’s wrath comes when Jesus returns.  We must [go] through much tribulation [to] enter into the Kingdom of God (Acts 14:22).

For You have tried us, O God; You have refined us as silver is refined.
You brought us into the net; You laid an oppressive burden upon our loins.
You made men ride over our heads; We went through fire and through water,
(Ps 66:10-12  NASB)

Read the book of Zephaniah and see just how much wrath God is going to pour out on His people for their sins – it should put you on your face before God.  “He has prepared a great slaughter of His people and has chosen their executioners“ (Zeph 1:7 TLB).

Perhaps you have not read (or remembered) that though as a child of God you may not be appointed to God’s wrath; but if and when you walk in disobedience – you then have it coming.  “The wrath of God cometh on the children of disobedience” (Col 3:6;  Eph 2:2).

Give Us A Man

Many in America think (or at least hope) that the coming election will make it all better.  No matter which party side you’re on, they both believe that their man (or woman) will fix it because it’s what the others are doing (or not doing) that is causing (or allowing) this.

First-World Christians have this mentality that they are not going to have to suffer but that their faith or their political party is going to deliver from any bad times.  They have no connection to the reality of even the last hundred years of history and the thousands of Christians that have been persecuted and died for their faith.  Let alone the Church in China that is suffering and being put to death by the thousands – even today.

God tells us that this is all a result of the wickedness of His people, not of the world, politics, or governments.  If My people, who are called by My Name (2Chronicles 7:14).  It is the people of God that hold a nation together and the same that bring it down – according to God’s word.

The answer is not in the polls, or even in your faith, but in the prayer closet – it’s in repentance. 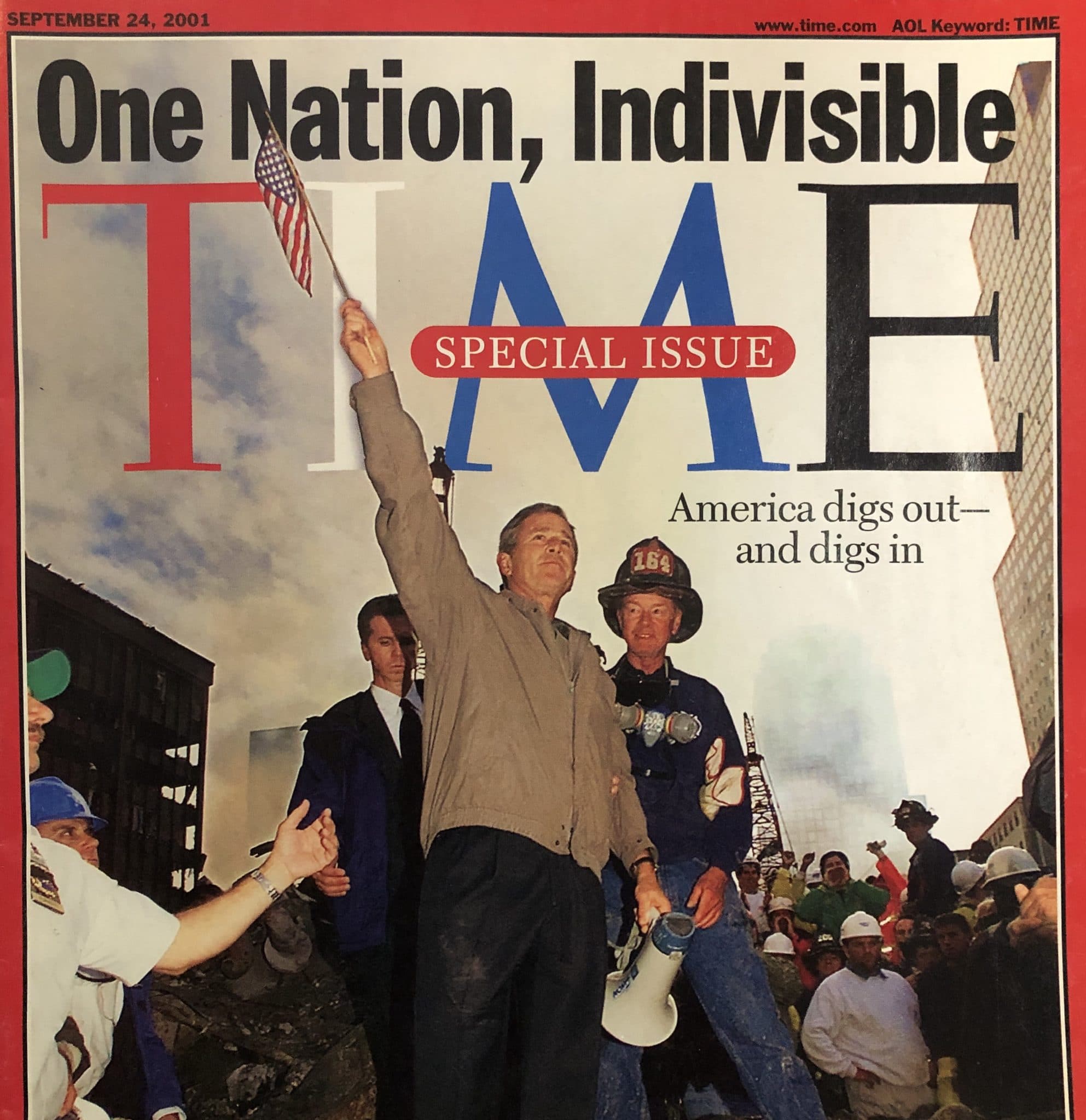 In Isaiah 9:11-22 – 10:1-19, God pronounces judgment upon His people because they did… just what America did with 9/11.  They suffered an outside attack that caused them to raise up in pride and declare that they would rebuild stronger. The bricks are fallen down, but we will build with hewn stones: the sycomores are cut down, but we will change them into cedar (Isa 9:10).

Rather than see it as God’s warning and repent of how far they have slid from God and were now out from under His protection.  They allowed God to be taken out of everything in the nation – prayer in schools, 10 Commandments off the walls and out of the halls of justice, say God is dead,… and then to wonder where was God on 9/11?  Where you cast Him that’s where – out of your nation America.

At this time, Time Magazine proclaimed “One Nation, Indivisible.”  What’s missing from that statement?   “Under God” used to be in the middle of that statement.  See how clear it was that America removed God from the nation and from helping them?

What will You do Now in The End?

Dear child of God, Repent!  Repent now and hard.  Don’t focus on your nation or your neighbor – God declares that you are the problem, not them (2Chro 7:14).  We are all that stands between our nation’s and God’s wrath.  Perhaps He will relent a little longer and give us a time of peace – for a space.  The End Times are a coming but it is possible that they may be delayed if we get right with our God.  God may spare our nation’s on account of our repentance.

But there’s not much time left.

If My people, which are called by My Name, shall humble themselves, and pray, and seek My face, and turn from their wicked ways; then will I hear from heaven, and will forgive their sin, and will heal their land. (2Chron 7:14)

Gather together and pray, you shameless nation, while there still is time—before judgment begins and your opportunity is blown away like chaff; before the fierce anger of the Lord falls and the terrible day of His wrath begins.  Beg Him to save you, all who are humble—all who have tried to obey.  (Zeph 2:1-3 TLB)

False TeachingWarningSignsDeceptionFruitLast DaysNews#TimesUpGodRepentanceAmerica
And if we know that he hear us, whatsoever we ask, we know that we have the petitions that we desired of him.
1 John 5:15
DailyVerses.net