Still wondering why the Dining Hall talks that Brother Stair does almost every day are still done in a corner?  (Acts 26:26)

Brother Stair wants to be heard and since he has so much to say, then why isn’t he saying it to his radio listeners who he claims are the people of God?  Does Brother Stair not want God’s people to know what he’s talking about in the Dining Hall?  Does Brother Stair not want the Overcomers to have Ministry?  Or is he using these hidden secrets of God to entice outsiders to come and join to be one of the special ones that get the special secrets of God only available to those who get invited to his Dining Hall (Rev 2:24)?

If Brother Stair truly has nothing to hide then why not let everyone in on it?  Brother Stair has told his listeners many times that most of his preaching takes place in the Dining Hall.  What is he saying in the Dining Hall that he doesn’t want the world to hear?  Is this where his secret sex talk takes place?  Where the touching of butts and breasts are done – wholesale?  Not only do many bear witness to these facts – but Brother Stair himself has alluded to it many times in his Sabbath Service preaching.

The problem is that the hundreds of us that have been in those Dining Hall sessions know that what is said would turn his financial supporters against him.  The Dining Room talks are for the captive ones that are locked in and have no easy way to leave.  So indiscretion in his words and actions are not necessary once you’re locked in and have no more money to give and no way to easily run.

Related:  The End, The End Has Come

In 2019 Brother Stair got a wireless mic set up so that he could go on the air live from anywhere on the Farm.  He has used this on occasion from his porch and while walking around the Farm, only a few times has he broadcast from the Dining Hall – where most of his preaching takes place.  Why is that?  What is being done in that corner that Bro Stair does not want us to hear?  He obviously wants us to hear everything else – no matter how much rhetoric it is.  So why withhold what he claims to be his best preaching from us?

Brother Stair needs to keep the ears tickled of his broadcast supporters in radio land (2Tim 4:3), feeding them with a palatable diet of his smooth ‘normal’ sounding messages.  Indicating to them that he is some great one without wrongdoing (Acts 8:9).  He also doesn’t want to shock his Radio Stations and have them drop him – again.  This is one reason Brother Stair replays old messages that are not compatible with his current state and his current teachings – but they are the palatable ‘norm’ that will bring in the listeners and their all-important funds.

Brother Stair is having the last laugh on this one. 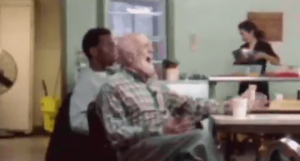 "It shall come to pass, saith God, throughout all the world there will be chaos, there will be floods, and famines, and earthquakes, and fires, and plagues on every side.  even before [March 2001] is past."  (Brother Stair, 2001 Prophecy)

CommunityCertain MenDeceptionFruitSexPerversionRevelationGropingIniquityRadioGodDone in a CornerDinningHall
Sing unto the LORD; for he hath done excellent things: this is known in all the earth.
Isaiah 12:5
DailyVerses.net