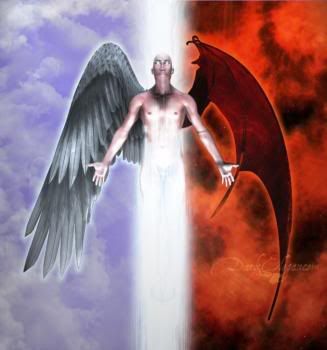 If I were the Devil the first thing that I would do is to say that I’m not the Devil.  That’s what Jesus told us the Devil does.  Jesus said he comes as an angel of light – a messenger of God (2Cor 11:14-15).  He does not come as the Devil.  He denies being the Devil – just like Brother Stair always does when he makes this statement.  This very thing is something that should shake us in our boots if we understand it.  This is the greatest self-statement of someone being a minister of Satan – vehement denial of that very thing.  As if his angry statement that he is not the Devil is enough to make it so.  While the evidence Jesus said to use says different – his own fruit (Mt 7:15-20).

Reminds me of the 1965 movie The Greatest Story Ever Told where the Devil (the Hermit) comes to tempt Jesus in the appearance of an old holy man (a gray-haired prophet).  Satan comes to tempt Jesus (just as he comes to us says scripture) hiding in the guise of a wise man of God with God’s advice to Jesus that He should follow.

Tip:  You’ll never find a man of God that is high in Narcissism and Machiavellianism.  In this, Brother Stair is on the scale of Donald Trump, Jim Jones, or Kim Jong-un.  So what does the Devil do again?  The Devil always comes denying he’s the Devil, he comes as a messenger of God with a message from God – to mislead God’s people (2Cor 11:14-15).  Your adversary is out to destroy you (1Pt 5:8).  He’s not going to come identifying himself as such.  He will be known in that his fruits give him away (Mt 7:15-20).  He walks contrary to God’s ways.  Enough said.  Verification accepted sir.

What Would The Devil Do

If I were the Devil, and I might be – test me to find out.  If I were the Devil there are certain works (some of which are covered in the article You’re of The Devil) that I would do that would come out of me.  Let’s list a few…

You’ll never find a man of God that is high in Narcissism and Machiavellianism.  These traits are the foundation of the Nicholatian doctrine of hierarchy – which Jesus hates (Rev 2:6;  Rev 2:15).

3 thoughts on “If I Were The Devil”

FruitDevilWolfSatan
For the earnest expectation of the creature waiteth for the manifestation of the sons of God.
Romans 8:19
DailyVerses.net