What will God do to those who say Someone is Of The Devil?

If they arrived at this conclusion by an examination of the man’s works (fruit) according to the word of God.  Then God will say well done, you took My word and applied it to the man’s works and you found that his works were of the Evil One (1Jn 3:12;  Rev 2:2).  This finding is what happens to those that flee from imposters.  The ones that are claimed to have ‘lost the witness‘.

Since they didn’t get a witness from God [because God doesn’t do things contrary to His word], it is what they found not what they lost that is important here.  They didn’t lose a witness, they got a witness – of what they both seen and heard (1Jn 1:3).  The witness comes from a man’s own fruits (Mt 7:20).  Sadly, that is the testimony that is often ignored (Jn 3:32).  Certainly by false men with evil works.

Scripture never disqualifies this fleeing with: unless you had a witness on them that they were something that you didn’t see them as.  No!  Scripture has only one recourse in that THEIR fruits are what shows what they are, and whose they are (Matthew 7:15-20;  John 8:44).

There is never precognition of a person via some spiritual checkmark as coming from God that is to forever mark that person as ‘approved of God’ – being supposedly some ‘witness‘ as coming from God Himself.  God told you that their works are your witness, if that contradicts what you think you heard from God – guess what?  You didn’t get it from God.  God doesn’t contradict Himself any more than He gives people witnesses on people.

Even David failed to hold God’s approval and lost God’s blessing and anointing on his life and works – because of his works.  As did his son Solomon in his latter days because his many wives turned him from God (1Kn 11:4).  This caused God to raise up enemies to destroy his kingdom (1Kn 11:11, 14, 23).  The judgment upon what he did.  It was the things that Saul, David, and Soloman did that got them off God’s ‘use list’.  It is a horrible thing for a king to do evil.  His right to rule depends upon fairness (Pr 16:12  TLB).

God’s prior approval and use of David did not come into play after his sin of adultery and covering his adultery with murder.  God was done with David at that point just as He was with Saul when Saul sinned and thought it was no big deal (Rom 6:1-2;  Pr 30:20).  Likewise, after Solomon built the House of the Lord and his many wives turned his heart away from God, God rose up adversaries to divide his kingdom (1Kn 11:4, 11).

What is Their Fruit

Jesus made it clear to us how to discern men of God vs. men who are of their father the Devil (John 8:44).  By their fruits ye shall know them (Matt 7:20).  You’re not getting any good nourishing fruit from a thorn bush (Mt 7:17-18).  You’re only getting bruised.  That bruising is a Sign of the fruit of the man.  Their great claims as to how called of God they are is all just a smokescreen to hide their prickly thorns (Matt 7:15-18).

What Would The Devil Do 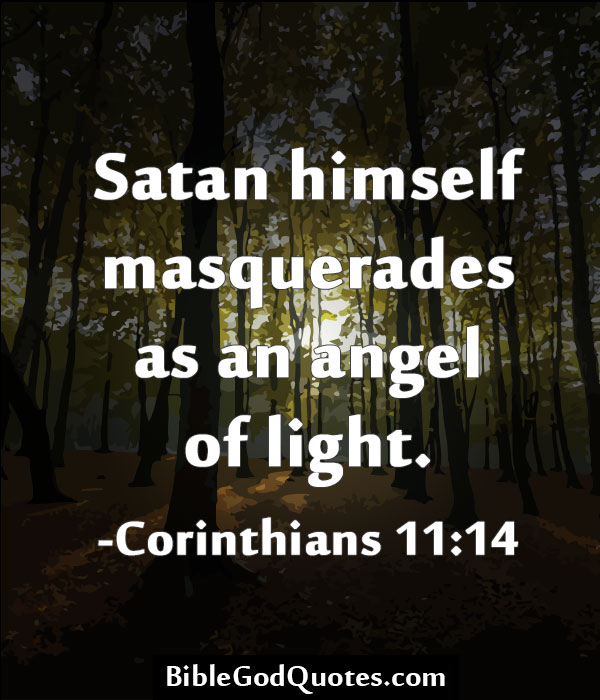 Related:  The Dwindling DOW & the Obvious

These are a few of the things that the Devil and his ministers are known for doing (Matt 7:16-18).

High and Lifted Up

You’ll never find a man of God that is high in Narcissism and Machiavellianism.  These traits are the foundation of the Nicholatian doctrine of hierarchy – which Jesus hates (Rev 2:6;  Rev 2:15).  It’s not God’s people that Jesus hates, it’s those who lord it over God’s heritage (1Pt 5:3).

This self-exaltation is the very Doctrine of Lucifer.  I will ascend above the heights of the clouds; I will be like the most High (Isa 14:14).  I will ascend!  When you see that in a man or a ministry beware.  It is most likely a worker of Satan.  Men that desire ascension and place titles upon themselves and claim callings and anointings from God that their fruit denies; are trying to ascend above God’s people.

These evil workers will often tell God’s people that they are of the Devil as a means to degrade them, which is a way for these men to exalt themselves over others.  They are following in the footsteps of their father the Devil (John 8:44;  Zech 3:1-2).

You might also find our article If I Were The Devil of interest.

Certain MenFalse TeachingSignsDeceptionWarningFruitLast DaysDoctrineSinIniquityAdulteryGospelDevilDavid
For the earnest expectation of the creature waiteth for the manifestation of the sons of God.
Romans 8:19
DailyVerses.net