Speak up for those who cannot speak for themselves, for the rights of all who are destitute.
Speak up and judge fairly; defend the rights of the poor and needy.  (Proverbs 31:8-9  NIV)

My people are destroyed for lack of knowledge (Hosea 4:6)
Not discerning the Lord’s body (1 Corinthians 11:29)

RGStair.com is here to present the present truth regarding Brother R.G. (Ralph Gordon) Stair and his Overcomer Ministry.  Proclaiming the ministry of the 7th Angel Messenger, the Son of Man, The Last Day Prophet of God Brother R.G. Stair, and the Overcomer Ministry in Walterboro, SC (USA).  All statements herein are true – these are not rumors, conjecture, rants, or slander.  Our goal is to magnify The Sign – just as Brother Stair desires.

What Brother Stair states himself to be today is well summed up in our top heading:

Heralding Brother Stair: the Last Day Prophet of God, the Voice of God; he who stands in Christ’s stead as the Son of Man today – taking Jesus’ place.  The Prophet who is the promised Comforter, and greater than Jesus Christ.

These are the claims of Brother Stair as of 2021.  If that shocks you perhaps you’ll want to dig a little deeper here and find out who Brother Stair really is and what these statements of his mean in relation to the Bible and sound doctrine.  Though it didn’t take long after his bold claims as God before Herod’s worms eat him and he died on April 4th of the same year (Acts 12:21-23).

In Berea, the apostle Paul was not flattered or taken blindly as God’s man.  His words were not blindly received.  Yet Paul did not rail on them telling them that he was the great Apostle Paul, the anointed of God,, or the “son of man” (that Bro Stair teaches him to be).  Nor did Paul say that they’d better get a “witness” from God that he was “God’s man” and settle it for them.  NO, rather Paul commended the Bereans that they were more noble because they searched the scriptures daily, whether those things that Paul said were so.  Daily!  There was no get a witness from God and settle it forever as Brother Stair teaches with his false witness doctrine.

We can also how Peter and Paul’s disagreements blow apart Brother Stair’s false teaching on the anointed son of men (Gal 2:11-21).  How can Paul state when Peter was come to Antioch, I withstood him to the face, because he was to be blamed (Gal 2:10) when Peter was certainly more a son of man than Paul was at that time?  How can Peter be questioned when Brother Stair teaches he himself is unquestionable all because of his calling, anointing, and son of man status?  Either we need to trust the Bible and stop adding in our own fabricated importance to it, or follow the irrational ideas of a wannabe.

With those New Testament exhortations, we should all do the same and searched the scriptures daily while we examine the fruit of the men we follow (Matt 7:15-20).  That’s our intent here.  We pray it will be yours also.  Our souls are in the balance.

Have nothing to do with the fruitless deeds of darkness, but rather expose them
(Ephesians 5:11  NIV)

I have a message from God in my heart
concerning the sinfulness of the wicked:
There is no fear of God before his eyes.
For in his own eyes he flatters himself
too much to detect or hate his sin.
The words of his mouth are wicked and deceitful;
he has ceased to be wise and to do good.
Even on his bed he plots evil;
he commits himself to a sinful course
and does not reject what is wrong.
(Psalm 36:1-4  NIV84) 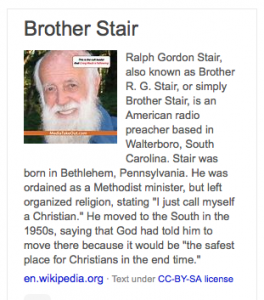 For we do not preach ourselves, but Jesus Christ as Lord.  We do not use deception, nor do we distort the word of God.  (2 Corinthians 4:5, 2  NIV)

Who has fascinated or bewitched or cast a spell over you?  Did you receive the [Holy] Spirit as the result of obeying the Law and doing its works, or was it by hearing [the message of the Gospel] and believing [it]?  (Galatians 3:1-2  AMPC)

This is the history of one man called into the Wilderness.  The genuine truth behind prophet Brother R.G. Stair – cutting through all the mud-slinging and hype to make clear who he is and what his ministry is.  We are here to clarify the teachings and doctrines of Brother Stair and how they fit and fulfill scripture.

I urge you, brothers and sisters, to keep your eyes on those who cause dissensions and create obstacles or introduce temptations [for others] to commit sin, [acting in ways] contrary to the doctrine which you have learned.  Turn away from them.  For such people do not serve our Lord Christ, but their own appetites and base desires.  By smooth and flattering speech they deceive the hearts of the unsuspecting [the innocent and the naive (simple)].
(Romans 16:17-18  AMP)

The woman named Folly is loud; she is naive and knows nothing. She sits at the door of her house, on a seat in the heights of the city, calling to those who pass by, who make their paths straight: “Whoever is simple (naive), let him turn in here!” To him who lacks judgment, she says, “Stolen water is sweet, and bread eaten in secret is tasty!” But they do not know that the dead are there, that her guests are in the depths of Sheol.  (Proverbs 9:13-18  BSB)

[His] deeds do not permit [him] to return… A spirit of prostitution is in [his] heart; [he] do[es] not acknowledge the LORD.  [His] arrogance testifies against [him]  (Hosea 5:4-5)

Who We Are Not

You might also like to know who we are not.  Since there are some without understanding or discernment in this area (Prov 28:5; Daniel 12:10).  Thus we found it needful in 2017 to add the article Who We Are.

A people without understanding will come to ruin
(Hosea 4:14  NIV)

Then consider taking action and donating through PayPal.

And I sought for a man among them,
that should make up the hedge,
and stand in the gap before Me for the land,
that I should not destroy it:
(Ezekiel 22:30)
Blessings shall be showered on those who rebuke sin fearlessly.
(Proverbs 24:25  TLB)

And I will come near to you to judgment;
and I will be a swift witness against the sorcerers,
and against the adulterers, and against false swearers,
and against those that oppress the hireling in his wages,
the widow, and the fatherless, and that turn aside the stranger from his right,
and fear not me, saith the Lord of hosts.
(Malachi 3:5)
Deliver those who are drawn away to death,
and those who totter to the slaughter,
hold them back [from their doom].
If you [profess ignorance and] say,
Behold, we did not know this,
does not He Who weighs and ponders the heart perceive and consider it?
And He Who guards your life, does not He know it?
And shall not He render to [you and] every man according to his works?
(Proverbs 24:11-12  AMP)

It isn’t our job to judge outsiders.
But it certainly is our job to judge and deal strongly
with those who are members of the church
and who are sinning in these ways
You yourselves must deal with this man and
put him out of your church.
(1Cor 5:12-13  TLB)

Jesus answered, “Be careful that no one misleads you [deceiving you and leading you into error]. For many will come in My name [misusing it, and appropriating the strength of the name which belongs to Me], saying, ‘I am the Christ (the Messiah, the Anointed),’ and they will mislead many. You will continually hear of wars and rumors of wars. See that you are not frightened, for those things must take place, but that is not yet the end [of the age].
For false Christs and false prophets will appear and they will provide great signs and wonders, so as to deceive, if possible, even the elect (God’s chosen ones). Listen carefully, I have told you in advance.
So if they say to you, ‘Look! He is in the wilderness,’ do not go out there, or, ‘Look! He is in the inner rooms [of a house],’ do not believe it. “So be alert [give strict attention, be cautious and active in faith], for you do not know which day [whether near or far] your Lord is coming.
(Matthew 24:4-6, 24-26, 42  AMP)

A Word About Our Ads

As a disclaimer.  This site may run ads at times.  Most of the ads that are run on this website are from Google Ads and may not reflect or represent our theological views or intents, and should not be taken as an endorsement from us.  We do not have control over the ads run on this site.  As such many of them are merely taken partially from the context of the pages they are shown on.  Please do not associate these ads with us, or us with these ads.

3 thoughts on “About Us”

We interrupt what Bro Stair says to bring you his fruit in a Testimony from a family member affected by Brother Stair's ministry:

"My husband has been attracted to an extreme religious group, which has the origins of a cult in Walterboro, South Carolina, USA.  It calls itself the Overcomerministry, the founder calls himself the 'Last Day Prophet'.  This man encourages break-up of families and has been quite successful in doing so.

My comment is that cults are formed by persons who are bitter about their own personal lives and are aiming to make themselves rich through the wealth of others by psychologically bullying vulnerable persons who lack inner strength at some point of their lives.  Belief in God has nothing to do with most of these incidents, it is purely evil and encourages wicked people to do more wicked things all in the name of God."

Brother StairCommunityFalse TeachingSignsDoctrineCultsJesusBrother Stair DeathSon of ManWalterboroFalse DoctrineWitness
The LORD is my light and my salvation; whom shall I fear? the LORD is the strength of my life; of whom shall I be afraid?
Psalm 27:1
DailyVerses.net