We All Get Fooled Again

In 2015 Brother Stair was duped by an email claiming to be from Archbishop Chaput Archdiocese of Philadelphia about Pope Francis wanting an audience with Brother Stair while he was in PA?  This naturally appealed to Bro Stair’s lust for power and recognition so he bit at it.  He talked it up and spread it around as truth.  Thus giving it credibility.  After all, this is the prophet of God and he wouldn’t propagate anything false, would he?  He says that everything that comes out of my mouth is from the Throne Room of God, thus validating this as truth (Micah 2:11).

One More Time Around The Mountain 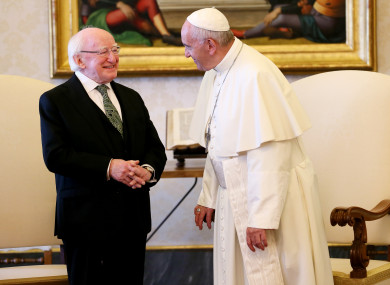 that time again. Pope Francis is coming to America, which makes it time for someone to bait Brother Stair in his lusts (which he has many of, and which he continually indulges in).  It seems his Almighty Holiness Pope Francis (as Brother Stair calls him) only needs a few weeks to set up for his meeting with Brother Stair just weeks before his visit.  Pope Francis’ flunkies have emailed Brother Stair again with a request to meet the Pope, this time at the Overcomer Ministry.

Pope Francis is coming to South Carolina to meet Brother Stair at the Overcomer Ministry Farm.  [As it should be, the low man coming to the high and exalted man]  Brother Stair tried to cover himself saying “this could very well be a hoax BUT we are going to pay attention to the implications thereof.”  Well, the implications are that the Prophet doesn’t see, again.  That he’s twice fooled, in this case.  Didn’t he learn anything from what he just said was his downfall because of YouTube?  He said it was his desire for being lifted up that he went on YouTube, against his own word from God to get the TVs out of your homes.  This same desire for exaltation is refueling his airing of this Pope email – again.  Same as it ever was.

The first and simple problem here is that the Pope is going to be in Italy during this time – he’s not coming to Pennsylvania, or South Carolina, or Brother Stair’s Overcomer Ministry.  His only visit outside of Italy in 2018 is to Switzerland on 21 June for the World Council of Churches.  As any non-prophet can see on his website.

Why does Brother Stair propagate so many lies?  Not only this same one multiple times but his news items and his own nonsense? (Jer 23:16)  Is it to bring about a fear in the people?  A fear that the time is short through which they will be more urgent to empty themselves of the funds they hold because they will not be of any use to them much longer?  Therefore they should send them to Brother Stair to use “for God’s work”?  This is the old shyster tricks Stair was so long schooled in, and like a good student, he became as his masters (Luke 6:40;  Jer 29:9;  Pr 4:14;  Pr 1:15;  Ps 5:4-6;  Ps 1:1).  He likes to say, “we learned the way of the heathen“ as if he doesn’t do those things any longer – but he does them all still. (Jer 14:14)

Deceiving and Being Deceived

All this glory seduced Brother Stair into again shelling out tens of thousands of radio listeners support to pay a shyster for nothing more than some fake emails, fake phone calls, and indistinguishable images of non-existent events, and a non-existent radio tower that supposedly he moved and erected in less than a day – record time.  All without any permits or clearing for broadcasting.  Or so Brother Stair was told – and believed.  As a simpleton would (Pr 14:15-18).

Not To Be Outdone

Then came the Nigerian Scams via emails.  Brother Stair went whole-hog on these and opened a separate bank account for these coming ‘kings’ deposits.  The Prophet had no idea what was going on.  Many times over, time and energy were spent by brothers that were instructed to pursue these non-existent funds this Balaam envisioned coming his way (Num 22:21-22).

Loss in the Stock Market?

Brother Stair tried his hand at the stocks to make a buck. This was just before the time when the stock market went into a slump.  He lost tens of thousands again.  Then prophesied that the DOW would never go over 10,000 points.  This prophet didn’t know enough as to when to invest and didn’t know that the DOW would exceed 26,000 points.  If only there was a prophet that could have told him to not pull out.

Before most of these things, the prophet sold his large stash of gold believing that the gold market was never going to go up.  This was at the end of the 1990s when gold was tanking and under $300 an ounce, just before it rose and has not stopped rising.  One would think a prophet would have known that, or at least sat on it a little while longer.

Many things like this testify that God is making sure that Brother Stair is shown to have no knowledge of the times.  Like (a report of) the chopping-up of a spool of large cable from his radio station in St George SC – from which he got about $50 for scrap.  When a week later it was found to be worth over $3000 if he would not have had it destroyed in haste.  Because he didn’t like seeing the big cable spool laying around.  The same cable spool that takes up the same amount of space as it did with the cable in it, sat in the same spot for years and is likely still there to this day.  Tell us the reasoning behind that one then.  But such is the ministry of death.

If this wasn’t enough.  The Prophet of God more recently has propagated news that Pope Francis has declared that there is no Hell.  About a week later the Prophet finds out that he has been spreading fake news – lies.  One would think, and hope, that the Prophet of God who we are listening to for the End Time words would know if something were true or not.  One would hope that the mouth with the words from God’s Throne would have at least a little discernment and not spread false words (Jer 14:14).  Keep hoping.

See the article Pope Invites Brother Stair for Personal Audience for the previous email hoax on this.

A Greater than Jesus is here [refering to himself].  (Brother Stair, 2006)

Clip from the Tabernacle May 20th 2006, Sabbath Service

CommunityFalse TeachingWarningDeceptionSignsFruitLast DaysNewsRadioYouTubeWalterboroPopeHolinessEmailDOWDeceivedStock MarketScamHellShyster
For if there be first a willing mind, it is accepted according to that a man hath, and not according to that he hath not.
2 Corinthians 8:12
DailyVerses.net