Then again in Oct 2008 (right after the stock market and the housing bubble crash) Brother Stair stepped into the Dining Hall and said, “Thus saith the Lord, The Stock Market will never go above 10,000 again.”

These previously failed prophecies are what Brother Stair is not telling you as he focuses you on the fall and the 666 points.  During February 2018 Brother Stair talked many times, and in service, about 666 and that “God” is using that number everywhere.  And here we thought the Bible told us it was the Beast’s number – not God’s (Rev 13:18).

We should wonder why the prophet that is supposed to reveal this 666 man – who many call the anti-Christ (a word that does not appear in Revelation), is so distracted from his purpose with all these rabbit-trails that get us off the target of the current anti-Christ.  Perhaps he has no clue and is looking under every 666 rock for some ‘revelation’. Showing us that he isn’t getting these revelations from God but from the news.

But since Brother Stair says that “revelation comes after the fact/matter” it doesn’t have to be revealed beforehand, thus there’s actually no need for a prophet then is there?  Folks, this is what is called 20/20 hindsight – not revelation.  We can see from all his other failed prophecies that Brother Stair isn’t even any good at speculation, let alone revelation.  As even these previous prognostications (at least) have shown us.

Know that if there would have been anything even close to what he predicted/prophecied in the DOW collapsing that you would have heard him boasting that he prophesied it would happen.  Remember Brother Stair proclaims that “Everything out of my mouth comes from the Throne of God”, so these cannot be taken as incidental words from his mouth.  Or is he going to say he misspoke again, or accept God’s judgment that he spoke presumptuously and should be disregarded by God’s people (Deuteronomy 18:22)?

Related:  Scientology The Big Story: Inside the Cult 1/3

So $100,000 was cast into a system that he preached was evil and going to fail.  Having that amount of money to put into the Stock Market also qualifies Brother Stair as a rich man.  Whom he said in 1987 was going to get hurt by the next crash.  Did he not believe his own words, again?  Or was he again driven by his love for money to make a million.

If we were to put God in it we might find that God is not only watching over Brother Stair’s word to make sure it’s not fulfilled.  So that He makes clear he’s a false prophet.  But also making clear his lack of hearing anything from God.

Keep Your Eyes On…

Maybe it really fell 777?  Or maybe it went up 777?  Who really knows under the ‘not really’ mentality?  Even if the Prophet is the only one that knows, he is not telling us what things actually are.  What good is he then?  He hasn’t told us what the 10,000 actually was but he insisted that it wasn’t what they reported it as.  So now that it’s triple that, is it finally actually still under 10,000 Brother Stair?  Who’s to know.  It’s as sealed up as the Thunders apparently.

Who knows according to Brother Stair when his 10,000 predictions failed.  This focus on 666 was spoken in a recent Sabbath Service just before he said, “Keep your eyes on Jerusalem”.  Then why then is Brother Stair fixing our eyes on 666, the DOW, President Trump, … – and not on Jerusalem? 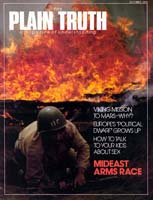 By the way, did you know this pet phrase of Brother Stair’s, “Keep your eyes on Jerusalem”, is not scripture?  No, we are told to pray from the peace of Jerusalem (Ps 122:6) and to fix our eyes on Jesus (Heb 12:2) – not on Jerusalem or on a prophet.

We were warned that the coming 666 men would seek to change laws (Dan 7:25) after all he is the lawless one (2Thes 2:3-4).  By the way, that Lawless One focuses on worship – do you happen to know of a certain man whose ministry does that?

Brother Stair’s “Keep your eyes on Jerusalem” came from one of the false doctrines of cult leader Herbert W. Armstrong (the World Wide Church of God), yet Brother Stair says Armstrong was correct on a lot of things (Pr 7:7, 11:12, 10:13).  This phrase was from an article from October 1976 in The Plain Truth Magazine, which Brother Stair read as a follower of Armstrong.

What you might not know is that Brother Stair’s Overcomer Ministry website uses www…  Brother RG Stair has told us that www equals 666.  Still, his website (until recently) has used this www 666 to prefix it [for decades] when it was not required.

Another sign is that Brother Stair’s Overcomer Ministry’s IP address (that they access the WWW/666 Internet with) begins and ends with 66…6 (66.xxx.xxx.6).  That should alert us to something.  Especially when Brother Stair himself declared that “the Internet is Satan’s seat” and then he chooses to sit in Satan’s seat.  That’s something you’re not being told in this 666 witch hunt, is it?  That looks like a great Sign doesn’t it?

We’re not saying this is identifying the antichrist (an antichrist perhaps), but then we’re not the one pointing the finger at 666 Trump Tower, or www = 666, or that the Internet is Satan’s seat – are we?  We’re pointing you to keep your eyes on Jesus, which is what is important (Heb 12:2).

Oblivious to the Obvious

In 2005 Brother Stair repeated two clips placed together of the famous American film, television, and voice actor Alexander Scourby reading a scripture verse saying “This is the place of them that know not God” immediately followed by Bro RG Stair saying, “This is the Overcomer Ministry”.  This would play in a loop several times when it aired.  It should have shocked everyone listening.  Or was everyone oblivious to what this just made obvious?  Put God in it! as Brother Stair use to say.

Above all, how many hidden things are coming into light that we are now seeing with this ministry, contrary to Brother Stair’s claims that nothing here is hidden or done in a corner?  We now know that many things were hidden and these things were actually done in a corner (Acts 26:26).

But we have renounced the things hidden because of shame,
not walking in trickery nor distorting the word of God,
but by the open proclamation of the truth commending ourselves to every person’s conscience in the sight of God. (2Cor 4:2  NASB)

See also The Delinquent DOW to see more predictions on the DOW from 2008.

1 thought on “The Dwindling DOW & the Obvious”

"I firmly do not believe we shall ever witness the year 2000."  He also goes on to say, "Before 1990 rolls around... I believe nuclear holocaust is that close." (Brother Stair)