If you don’t recognize these first few phrases used by Dr. Gene Scott in the video, then you haven’t listened to Brother Stair long.

Perhaps the reason Brother Stair doesn’t like Gene Scott is that he has patterned himself after Scott and here we see that Scott was granted with the title that Stair covets – the greatest radio broadcaster of all time.  Perhaps they have the same father.

Brother Stair may have been around a while, and preached a lot – but he’s a piker when compared to Gene Scott – who is still the perennial shortwave religious broadcaster – something Brother Stair tried to take the credit for after Scott’s death in 2005, thinking he would go off the air – which Scott didn’t.

If you were to take Scott’s preaching and repeat it to where you would not have any fresh content, you would still have 4.566 years of fresh material.  Not gonna happen with Brother Stair.  Mostly all Bro Stair’s Overcomer has is the same content day after day – not only nothing new but nothing changed.

In the years since Dr. Scott passed away in 2005, there would only be 22% repeats over that last 12 years – that’s with having 0% new content (as he’s passed away so he’s not making new content).

Related:  In the Days of the Voice of the Seventh Angel

Meaning that in the 12 years since Dr. Scott passed [in 2005], you would have only heard a repeat 1.5 times (essentially twice if you’re listening 24/7/365) – and that would have been something that you heard over four and a half years ago.  Can you say that for Brother Stair?  Repeats?  Yes!  But that’s because Stair plays little things over and over like mind control.

Though Brother Stair has been preaching for over 50 years he does not have years of fresh unrepeatable content and most of what content he has is the same old same old rehashed content.  You might sum up everything he’s ever said in a couple of hours.  Wait, Bro Rick Bell did that in one of his messages. 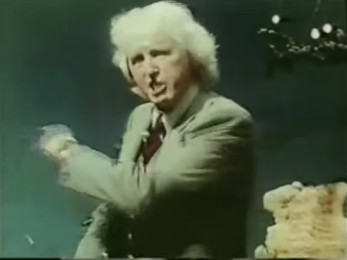 The documentary follows Gene Scott, famous televangelist involved with constant fights against FCC, who tried to shut down his TV show during the 1970’s and 1980’s, and even argues with his viewers, complaining about their lack of support by not sending enough money to keep going with the show. Werner Herzog presents the man, his thoughts and also includes some of his uncharacteristic programs.

"I tried to tell you years ago when Jesus said; 'If I go away I will send to you another Comforter.  A man filled with the Holy Ghost with the Spirit of Truth who will lead and guide you.' " (Brother Stair, Dec 5, 2020)

Audio clip of Brother Stair making himself the Comforter

Audio clip of some of Brother Stair's Erroneous Doctrines

Charge them that are rich in this world, that they be not highminded, nor trust in uncertain riches, but in the living God, who giveth us richly all things to enjoy.
1 Timothy 6:17

Certain MenLast DaysYouTubeAnger
Charge them that are rich in this world, that they be not highminded, nor trust in uncertain riches, but in the living God, who giveth us richly all things to enjoy.
1 Timothy 6:17
DailyVerses.net