The Lie of The Desert

Argue that it doesn’t matter but if you or anyone else cannot validate your story, then just because you believe it’s true and you have some inner fuzzy ‘witness’ that it’s true – that doesn’t make it true.  Any Zoologist will tell you this is a fabricated story outside of truth.  Brother Stair says he didn’t make this up (as he has done with most of his stories) rather he has taken it (he used the word stolen once) from someone else that preached this false message.

Brother Stair liked the sensationalism of it so he used it, not caring if it was true or not – and still doesn’t.  Because he still airs it!  [and even after his death his predecessors are airing it]  What a way to show discernment of truth to your audience.  Which might not matter so much if you’re not putting yourself out as THE man of truth for this generation [Acts 8:9].

Related:  Shall We Begin?

This misleading might have worked fine before the information age when you could sell your audience on any fanciful sounding story as they had no way of proving or disproving it.  But today we know better.  This is Bro Stair tickling his listeners’ ears (2Tim 4:3-4).

There is a desert owl – the Pharaoh Eagle-Owl.  It’s not white, it’s not big, it’s not anything related to what Brother Stair’s story suggests – aside from living in the desert. 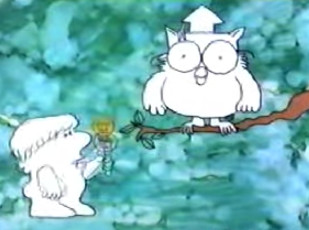 Brother Stair talks about an owl, a bird of prey (like himself), and makes it “Christlike”.  Christ is not a bird of prey, you’re thinking of Satan Brother Stair.  It reminds me of a wolf telling the sheep that he’s their leader, “obey me in everything”, “let me devour you”.

Interesting how Brother Stair has an audience that is in as much folly as he is on this one.  He enjoys making them laugh.  This is so much like Brother Stair’s standard way of taking some story and hammering it into some spiritual meaning to justify it – even when it’s based on a lie.  Kinna like what he says about the Devil stole everything.

This storytelling is the type of shystering that he was schooled in and he would make it his trademark with his many taped messages on various topics to stir people up that he could play over and over.  He would later advance his gameplay to playing with words – making his own meanings for them, like “Israel = He is real”.  This would climax in perversions to totally changing the true meaning of words like defining Impenitent as “a heart that repents”.

I guess that would finally make Brother Stair qualify as repenting?  Because he is defiantly impenitent.  But after thy hardness and impenitent heart treasurest up unto thyself wrath against the day of wrath and revelation of the righteous judgment of God;  Who will render to every man according to his deeds (Rom 2:5-6).

Some other Related Notes and Owl FACTS to ponder:

TabernacleFalse TeachingFruitCultsHeresyChristWolfStories
Sing unto the LORD; for he hath done excellent things: this is known in all the earth.
Isaiah 12:5
DailyVerses.net