Walterboro, SC circuit judge Perry Buckner sets Brother R.G. Stair’s bond at $750,000.  Brother Stair has more than that stashed back, this is the reason he canceled his radio stations on 1 Jan 2018.  His bond will be something like 10% or the actual amount, or $75,000 which he easily has of his almost $1 million stashed back.

Stair has to have (his old friend) electronic GPS monitoring placed on him.  Law enforcement also has unfettered access to the community, as Stair is not allowed to have physical contact with a minor under 18.  How this is going to work out which Bro Stair having services is unclear.

UPDATE:  Bro Stair was unable to go to the Tabernacle for services the week he returned as the GPS tether would not reach to the Tabernacle, so he talked on the air instead of having a Sabbath Service.

By not restricting his radio preaching judge Buckner is allowing Stair to publicly deny his charges and gather funds for legal fees to fight back as he did in 2003.  Bro Stair is also now able to get control back and set things in order so that he cannot be taken down, just like he succeeded in doing in 2003. 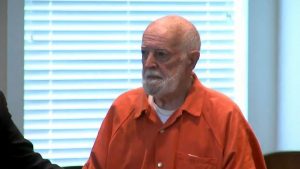 Preacher arrested for sexual assault allowed to return to Walterboro compound, given $750,000 bail

We’re updating as the reports come in.  Keep checking back to the website…

Shall we continue in sin...?  God forbid.  How shall we, that are dead to sin, live any longer therein?  Know ye not,...?  ...even so we also should walk in newness of life.  Knowing this,... that the body of sin might be destroyed, that henceforth we should not serve sin. (Rom 6:1-6)

I have been crucified with Christ; and it is no longer I who live, but Christ lives in me; and the life which I now live in the flesh I live by faith in the Son of God, who loved me and gave Himself up for me. (Gal 2:20 NASB)

In putting off the body of the sins of the flesh by the circumcision of Christ. (Col 2:11)

Put to death, therefore, whatever belongs to your earthly nature: sexual immorality, impurity, lust, evil desires and greed, which is idolatry. Because of these, the wrath of God is coming. (Col 3:5-6 NIV)

They are of no value in checking the indulgence of the flesh (the lower nature). [Instead, they do not honor God but serve only to indulge the flesh.] (Col 2:23 AMPC)

NewsRadio#TimesUpArrestWalterboroRape
But who am I, and what is my people, that we should be able to offer so willingly after this sort? for all things come of thee, and of thine own have we given thee.
1 Chronicles 29:14
DailyVerses.net