AP’s David Biller reports on the outworking of Brazil’s #metoo moment which had accused the Brazilian spiritual guru of sex abuse earlier this year (2019).

“Hundreds of women, including his daughter, alleged he regularly engaged in abuse ranging from groping to rape.”

It seems God is pointing out something with these sexual perverts with the number 77.  As with the spiritual guru Brother Stair who was incarcerated in county lockup for 77 days awaiting a bail hearing over his rape charges.  Don’t let Stair convince you that it was judicial injustice that made it take that long, no, Bro Stair denied set hearings.  Now we have this Brazilian spiritual healer guru who at 77-years-old has finally been charged with four of his crimes.  Rick Bell prophesied that Brother Stair would die in his 77th year, which would have been 2010.  Another failed prophecy from the Overcomer prophecy club.

Another of the many warnings these spiritual rapists are getting before their number is up – for jail time or for Hell time. 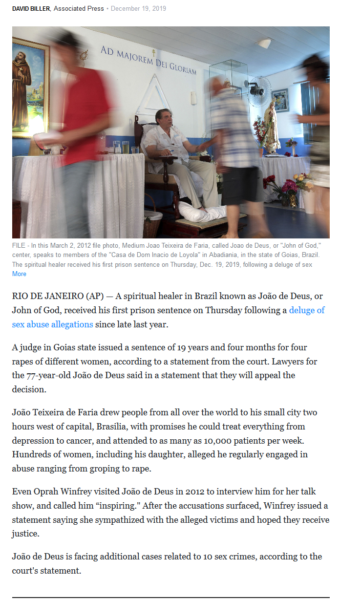 The last two years have been a whirlwind for the Elijah Prophet Brother Stair.  Still being bound to his Farm under GPS ankle bracelet, he can’t carouse in the daytime [2Pt 2:13] off his Farm for his sexual perversions, as he did in the past.  Why do you think he bought all those houses that he’d go to visit? (think hooking-up with his hired women)

Alas, this sword of Damocles that is over him serves no warning to him, even though he will constantly remind his followers and radio listeners that they are the ones who should realize and fear this.  Apparently not Brother Stair, as he has thrown off any shred of restraint that he used in the past to tame his violent vocals and loose hands.  Bro Stair cannot stop calling the Body of Christ damned, peanuts brains, so damn dumb, and whatever his anger will vent.  He is without restraint [Pr 25:28] at a time when you would think he would be cautious and earning respect from his followers and financial supporters in radio land.

Brother Stair will get all giddy and giggly when he’s flirting with a woman (sorry, that’s sister, as Brother Stair doesn’t touch women – only sisters) and makes inappropriate comments to her, even in public and on the air.  Then when he looks at how his own people are disgusted with his behaviour he then vents into a rage of anger that they are the ones in the wrong.  Classic narcissism in action.  One wonders if this will ever end?  Will his victims ever get justice?  Give us your comments below.

Click here or on image to see the Live-5 report 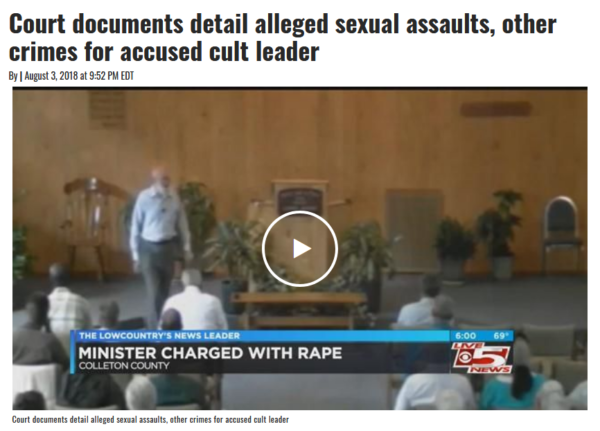 God told me to not Challenge you Brothers when you tell me God told you something.  God speaks to you too. [Aug 2002 after coming out of Jail]

Then, in 2004 when Brother Paul told Bro Stair that God told him (Paul) to tell Bro Stair that he should back off the Internet [what Stair was personally doing on the Internet].  Bro Stair kicked Bro Paul out in a rage and Paul walked off the Farm - in faith with nothing.  Not even going back to his trailer to gather his belongings or his ID.  Bro Paul had done what God sent him there to do - Bro Stair rejected it (3Jn 1:9;  Mt 18:17).  Bro Paul's work was done (Mt 18:15-18;  Pr 5:23).

A few months later (Dec 2004) Bro Stair reaped his rebellion when he aired worldwide the pornography that he was watching in the Radio Room [what he was warned to stop doing - by a man of God - that Bro Stair rejected - that he said "God told him" to not reject (Pr 17:10)].

Then Brother Stair said that for him Pornography was Strong Meat and that he could handle Strong Meat [porn] but the rest of us couldn't handle it, so we should stay off the Internet.  [Appatently that's what the Internet is for to him.  The same Internet that he said in 1998 that God told him to have nothing to do with.  It seems God does change His mind - unless it's about your witness on Bro Stair - then you're locked into that one.  He gets to change his witness on you [damning the leavers] - but you don't.]  Apparently, this strong meat (pornography) belongeth to him because he is of full age and by reason of use has his senses exercised (Hebrews 5:14).  [Apparently, he has reason to exercise some meat that his senses belongeth to.]

So, back to what God told him.  Certainly, we've not heard Bro Stair challenging what God has spoken to us - have we???

And forgive us our debts, as we forgive our debtors.
Matthew 6:12

Certain MenDeceptionWarningFruitLast DaysLast Day ProphetsFalse ProphetsSexNewsCultsProphecyPerversionGroping#TimesUpJailArrestRapeTrial
And forgive us our debts, as we forgive our debtors.
Matthew 6:12
DailyVerses.net