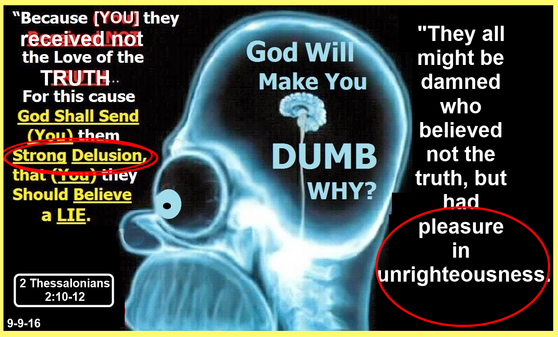 Have we come to the end of thinking that Brother Stair was anything that he claimed to be?  To realize that all his words were lies – even those words that have a skin of truth on them?  Have we come to the realization that he just used those truths in God’s word, in the news, and in other prophecies – to lead us on in his quest for greatness?

Or are we still blind in the ditch clutching for some light that God has withheld from us because He has turned us over to this strong delusion because we loved the prophet more than the truth (Matt 15:14;  2Thes 2:10-12)?  Which was made clear when we would accept his words over what we knew was right (Pr 19:27).  Stop listening to teaching that contradicts what you know is right (Pr 19:27  TLB).

These are just some thoughts for today which mark seven months after Brother Stair’s death.  Thus putting Brother Best’s 30-day extension to rest.  This can be heard in the first call on Phone Messages #15.  We can sadly be sure there will be other grace periods added by those who continue to refuse the truth and walk in the lies that Brother Stair brought forth (Rom 1:28-32;  2Thes 2:10-12;  2Tim 3:7;  2Pt 2:14-15).  Just like there are Brenhamites and Branch Davidians still today.

The Ministry of Presumption

How do the followers of Brother Stair think that the revelations that he put forth are going to be revealed now?  So many things are presumed to happen (Deut 18:22;  Num 15:30;  Deut 17:12).  No last Thunders.  No Two Witnesses.  No Last 40 Days of America proclamation from the prophet.  No Trumpets, Bowles, or Seals.  No trip to Jerusalem.  No death by the Pope.  No dead rising the Last 45 Days.  No Jonah Sign.  No end time Revival.  No Gathering of 1,000 at the Overcomer Farm.  No Antichrist was identified.  No Jesus came within six months of his death.  No handing Jesus back the Son of Man title.  So many things left unfulfilled in the Future Timeline.

Yet they remain clinging to their idol for hope (Jonah 2:8).  Where has the wisdom gone to realize that then you will know that ‘God has not sent that prophet’? (Jer 27:15).  Perhaps that’s the Jonah Sign that Brother Stair can now claim?  The sign of those clinging to worthless idols.  They that regard lying vanities forfeit the mercy that could be theirs (Jonah 2:8  ASV/NET).

How Did We Get Here?

This is something that shouldn’t have to be brought up… but it does.

The reality is that the only way one believes in Brother Stair is through deception, manipulation, and spiritual delusion.  Okay, so that doesn’t look like it’s an ‘only’ but they are the same category of an emotional/spiritual ploy.

It is one that has to take the hearer away from the word of God – by using the word of God (2Peter 3:16;  Matt 15:9).  This is the same trick that Satan usually uses on Christians.  He can’t get you to turn from God directly, so he uses God’s word and perverts it so that you are turned away or that you back away.

Backing away is the most effective because it holds its victims in its grip longer.  Because it gives you the illusion that you have not turned from God and are still ‘pressing on’.  This is because you are still seeing God in the distance.  He is ‘before you’ but what you don’t realize (until it’s possibly too late) is that you have gotten farther and farther from God.  He’s getting smaller and smaller, and someone else (Brother Stair) is getting larger and larger (“The Sign must be magnified”).

This is the evil spell that is cast by those like Brother Stair upon their victims to deceive them into following them and then later into exalting them.  All the while thinking they are still (and even more earnestly) following God.  Thus making it harder for them to see the true light of the deception that they have succumbed to.

And If I Be Exalted

You see (if you do) that this deception should be clear to Christians because the word of God is clear on how to discern all men.

There are two primary reasons that these men are able to thwart us.  One, we don’t know what God’s word says and we don’t hold it in our hearts – we haven’t applied it to real life.  Perhaps we also haven’t studied Proverbs which is critical in understanding the outcome related to actions.  Not only in ourselves but in others.  Two, these men use the method of being ‘spiritual’ and apply Simon the Sorcerer’s trick of ‘making themselves out to be some great one’ (Acts 8:9).

This last method is effective because it gets people to bypass God’s requirements upon all men.  These deceivers exalt themselves above any scrutiny by placing themselves in a ‘calling’ or ‘anointing’ straight from God Himself.  Therefore, to question that places you in their crosshairs and you are excluded from their company so as to not influence those they have deceived with this method (3John 1:9-11).

Related:  Is There Shame

Can I Have A Witness

This is further reinforced by them using God as the anchor to hold you to their delusion.  They cast all their verification upon you getting a word (or witness) from God about them.  Once that trap is set you either think God told you (with exactly the words the leader said He would use – how convenient) even though God’s word says He won’t do this.  Or you just buy into it because you figure no one would be so evil as to make such a ridiculous claim that wasn’t true – even though God never verified him to you as the deceivers’ gameplay warrants.  Or because you figure you’re not spiritual enough to hear from God like that and you just go with the flow and believe the deceiver by proxy.  Either way, it works for the deceiver (2Tim 3:13).

Naturally, God is not going to tell you that this person is ‘of God’ because this would be against the word of God, and God doesn’t go against His word – even though these false leaders do.  One way that God has used to reveal the true nature of these certain men (Jude 1:4) is in observing that they wax worse and worse in their ways (2Tim 3:13).  Another is the Test below.

This is usually why those who are really the most spiritual never hear such nonsense from God – because they are not getting fooled by a demonic spirit.  They either soon fall away (as the deceiver will call it) or they become those who just follow by proxy – they see other believers following so they assume this must be right.  They are still likely to be those who are the first to fall away as they flee from these deceivers.

Did you test that spirit that spoke to you that gave you that witness to the deceiver?  Probably not because you didn’t test his fruit either, did you?  It is certain that the deceivers didn’t tell you to do any testing of them aside from that false witness thing.  Because if you obeyed God and tested what you thought God spoke to you then you would have found that it wasn’t God who told you the person (Brother Stair) was of God.  God doesn’t do that and the fruits of the leader are what verify them as to whose servant they are.  Good trees (from God) bear good fruit – they cannot bear bad fruit (Luke 6:43).  Bad fruit comes from bad trees (Matt 7:17).

This is why you see many leaving these leaders when the revelation of their bad fruit comes to light.  At least some people can see the truth when it slaps them in the face.  While others are even more entrenched into the ditch that they have fallen into with their blind leader (Matt 15:13-14).  They make excludes for these fruits and don’t believe that they are the criteria for their leader’s validity (Matt 7:15-20).  This false teaching was taught to them by their leader.

This exodus often leads to the ‘hangers on’ being even more ‘stuck in the mud’ as their leader convinces them that they are the FEW and those that left have ‘fallen away’ to destruction.  Teaching this fear makes them even more resistant to refuse any questioning and common sense in examining the situation of the leaders’ fruits (Mt 7:15-20).  Thus they usually just push them aside so that they can ‘press on’ until the end.

It is this ‘soon coming end’ which is another trick/ploy that these shysters employ upon their victims to get them to ‘hang on’ longer.  Sadly, the more that leave the more hardened those remaining become.  Thus, the longer someone is in a cult the harder it is to release them from its power.

This rejection of all sound judgment is seen today in the followers of Brother Stair.  His death has made it clear that what he’s said is invalid and that all his prophecies have failed.  Yet somehow some still refuse to see this.  Even those that only listen to his broadcast and don’t live in his community.  How is that?
Proverbs 4:23 tells us – Above all else, guard your affections.  For they influence everything else in your life.

These people are affectionately affected.  This is the reason that emotions (and spirituality) are used by these shysters to deceive people.  God’s word says right there in Proverbs 4:23 that if you want to affect every area of someone’s life that you go for the affection, the heart, their emotions.  For Christians and in the area of deceiving someone spiritually – you go for what they consider spiritual.

Marketers know this principle.  People buy on emotion more than on logic.  You don’t convince someone to buy your product because it’s better than the others but because of how it makes you feel.  Thus we find that logic has met its barrier when it comes to trying to deal with these followers.  They refuse logic.  They have been sold an emotional (spiritual) bag of goods that makes them feel like it’s going to save them.

This is the same thing we are witnessing today in politics and society.  People are emotionally swayed and moved.  Logic does not phase many of them.  The Left uses emotion to move their followers.  The News appeals to emotional issues, not factual issues.  They have targeted people’s emotions on issues rather than truth and logic.  And we see how effective it is.  This is why they are so emotionally entangled with their beliefs in their political positions.

Total Votes: 99
Voters: 98
Polls Archive
×
You or your IP had already vote.

Brother Stair is indicating here that we should all tremble before Bro Stair and if we don't, then we're a devil.

For with the heart man believeth unto righteousness; and with the mouth confession is made unto salvation.
Romans 10:10